Konata Izumi (泉 こなた Izumi Konata) is one of the main characters of the Lucky Star series. She is the leader of the Lucky Star crew and the daughter of Sojiro Izumi and Kanata Izumi who lives in her house in Saitama prefecture near Tokyo. Nicknamed "Kona-chan" by Tsukasa Hiiragi, she is an eccentric but friendly person.

Konata is a mischievous, sarcastic, but a good-natured, eccentric and friendly girl who is very intelligent, but she is lazy, which is why her grades are uneasy. She always teases her friends in a funny type of way, such as if they like someone. However, unlike Kagami Hiiragi (Konata's friend), Konata is very good at pulling an "all-nighter" and she always crams for tests the night before they happen, instead of studying ahead.

She is very fond of anime, manga and adult video games due to her father's influence. She refers to herself as a prankster and enjoys teasing her friends, especially Kagami, who always gets mad at her. Konata is an athletic girl who does not participate in any clubs out of the fear that she will miss watching her afternoon anime.

Konata's appearance is rather child-like, as she has a petite physique, is shorter than all the Lucky Star characters except Yutaka Kobayakawa and Hikage Miyakawa, and is flat-chested, unlike most of her friends. She has long, shiny, blue hair that reaches her calves, and green sleepy eyes. Her appearance is very similar to her mother's, but she has messier hair, tanned skin, a large ahoge, a split lip that gives her a catlike smile, and a small mole under her eye, which she inherited from her father, Sōjirō Izumi.

Like her mother, Kanata Izumi, Konata is a female, has long blue hair, is very short for her age, has green sleepy eyes, and is also very skinny. Most of the time, Konata is depicted without a nose, just like most of the Lucky Star characters. Like all the Lucky Star characters, Konata has a certain face shape that is chubbier in the cheek area, abnormally large eyes that take up more than half of her face, messy hair, and messy bangs.

In a scene from Episode 7, Konata is seen looking a bit different, as she is seen with lip gloss, visible eyelashes, and a visible nose. Her voice also became more ladylike, as opposed to her usually lazy and "tomboyish-sounding" voice.

Konata lives with her father Sojiro Izumi; her mother, Kanata Izumi, died shortly after she was born. When she graduated to 10th grade (In Japan: 1st grade of High School) and made it into Ryōō High School, she met Tsukasa Hiiragi, Kagami Hiiragi, and Miyuki Takara. In order to fund her interests, Konata had a part-time job at a cosplay cafe in Akihabara where she cosplays Haruhi from The Melancholy of Haruhi Suzumiya. A little later in the series a girl called Yutaka Kobayakawa, Konata's cousin, joins the Izumis in their household. Starting from the episode I Can't Suddenly Change, Konata and her friends enter their final year in high school. During the beginning of the school year Konata meets a new girl at her job named, Patricia Martin, who is a transfer student from America. During the episode The Yonder Here, Konata learns more about her mother Kanata from Sojiro. Konata and Sojiro prepare to take a picture; Kanata joins in with them, but appears as a shadow in the actual picture. Konata and Sojiro review the picture and are highly shocked and fear that they are cursed. In To Be Decided, Konata and the rest of the main cast take place in cheer leading session for the school's cultural festival.

Games, Anime and Manga that Konata can be seen playing or referring to

For example, the MMORPG she can be seen playing in the OVA is "Tower of Druaga: The Recovery of Babylim". In the anime, Konata constantly refers to parodies of several popular games, anime, and manga (such as Yu-Gi-Oh!, Suzumiya Haruhi no Yuu'utsu, Sergeant Keroro, Pokémon, Kanon 2006, and DragonBall Z) to annoy Kagami. Her favorite franchise seems to be the Haruhi series, as she has many Haruhi figurines and decorations in her room, went to the Suzumiya Haruhi no Gekisō with her friends, has a Haruhi wallpaper on her new phone, and has "Hare Hare Yukai" and "Koi no Mikuru Densetsu" as her ringtones. But in one of the later episodes, she says her favorite manga is Sgt.Frog, as is Tsukasa's. She relates most to her frenemy Kagami as they are both tomboys with similar interests in video games and anime. Though Konata likes RPG games and visual novels and Kagami likes shooters. In the anime series, the MMORPG she can be seen playing with her teacher, Nanako Kuroi, is called Filna Fatansy. This is a parody of Final Fantasy XI and is not misspelled.

Konata appears in Lucky Star: Net Idol Meister for the Playstation Portable. She is the very first (and seems to be the only one) to audition as a net idol for Animate, believing that she'll get loads of free anime goods if she gets accepted.

Names in other languages

Konata trying out a UFO catcher

Konata successful at the UFO catcher

Konata's fantasy about the elements of the dentist office

Konata explaining how to make a submission post card stand out

Konata with a ponytail 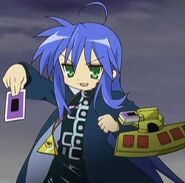 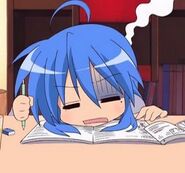 Konata taking a picture with Sojiro

Konata Dancing in Her Working Place

Konata and the others waiting in line

Konata and her speech about her chest size

Konata in the theme song 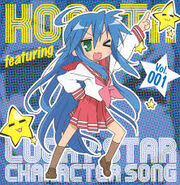 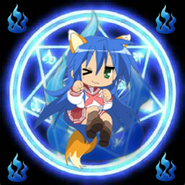 the power of Konata Izumi

Hiyori's Notes Page
Add a photo to this gallery

Retrieved from "https://luckystar.fandom.com/wiki/Konata_Izumi?oldid=13023"
Community content is available under CC-BY-SA unless otherwise noted.

Fandom may earn an affiliate commission on sales made from links on this page.

Fandom may earn an affiliate commission on sales made from links on this page.