Misao Kusakabe (日下部 みさお, Kusakabe Misao) is a childhood friend of Ayano Minegishi since kindergarten, along with Kagami, her fellow classmate. She is a stereotypical 'tomboy' character.

Misao Kusakabe has short, uneven, smoky brown hair with bangs. She has a visible sharp tooth protruding from her mouth. She is a centimeter shorter than Minami. She has tan skin and chocolate brown eyes.

Like all the Lucky Star characters, she has a certain face shape that is slightly chubbier in the cheek area and slightly more 'indented' in the upper area, abnormally large eyes, messy bangs, messy, uneven hair, and fringes that frame her face.

Misao lives with her grandmother, grandfather, mother, father and an older brother (who, like Miyuki's "older brother", was only mentioned once or twice, and who is Ayano's boyfriend, according to volume 7). However, none of their names are revealed in either the manga or the anime.

Misao tends to be quite lazy, simple-minded and an outdoor loving tomboy. She is in the track and field club, hates studying, and harbors a love for video games, despite not being particularly talented at them. She is also noisy and a rather clumsy eater. She has tanned skin, slightly slanted eyes, and a small fang in the side of her mouth.

Misao does not seem to be skilled at playing video games, yet plays them purely for fun; she notes on having borrowed many games from various people. In fact, her concept of "play for fun" is so strong that she does not mind losing to Kagami, instead marveling at how well her friend plays and making a loud, congratulatory spectacle. This leaves Kagami with a sense of guilt and bewilderment. At one point, Kagami compared Ayano and Misao to Tsukasa and Konata respectively, Konata and Misao being loud tomboys while Tsukasa and Ayano are quiet girly girls, though Kagami herself is a tomboy with a girly side. Misao initially dislikes Konata, angry at her for "stealing" Kagami away from her group, and often rants about Kagami leaving her group for Konata who she knew for only one to two years. She calls Konata by the name "Chibikko" (ちびっ子, "Chibikko") which is literally used as an equivalent for "midget", and can be literally translated to "a very tiny object", and Misao is nicknamed "Misakichi" (みさきち, "Misakichi") by Konata in Manga (also in the OVA).

In the Japanese version of the anime, Misao generally speaks in slang which somewhat resembles a fake Kansai dialect, combining and shortening Japanese words, or twisting the characters around in a word to make a new one with the same meaning.

She also sang alongside Ayano in volume 009. The songs she and Ayano sang were: 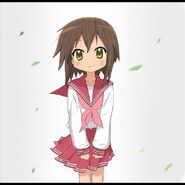 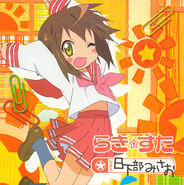 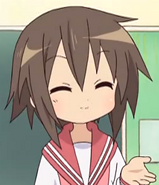 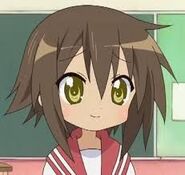 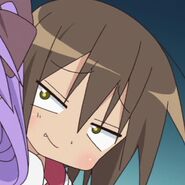 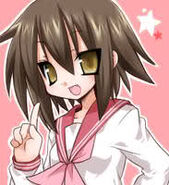