Episode 16
Patricia Martin, also known as Patty, is one of the main characters of Lucky Star. She is a first-year transfer student from the United States and a coworker of Konata Izumi. She is the biggest 'genki girl' of all the characters.

Patricia has a slim physique; she has wavy, blonde hair in a pixie cut, and sky blue, down-slanted eyes. She has the second biggest chest size, after Miyuki Takara. She is of average height for an American girl but is tall compared to her Japanese classmates.

Like Hiyori Tamura, Konata Izumi, and Izumi Wakase, Patricia is an otaku. Patricia loves anime and manga and has learned all her Japanese through them, leading to her having a very unusual Japanese vocabulary. Because of her nationality she has a bit of an accent compared to the other characters.

She tends to make generalizations of Japan and its culture based on otaku culture, even more so than Konata. She claims to enjoy a wide range of Japanese music, however, the only artists she listens to are those who have performed anime theme songs, and only those songs alone. She is extremely bubbly, energetic and lively, and has a high interest in yaoi.

Before the events of the series, Patricia transferred from the United States to live in Japan. During her stay in Japan, she is known to be living alone in her apartment. Patricia works with Konata at the same cosplay cafe and is often seen cosplaying as Mikuru Asahina from The Melancholy of Haruhi Suzumiya. Patricia first meets Tsukasa Hiiragi, Kagami Hiiragi, and Miyuki Takara while performing in the cafe during the episode Ring. After being accepted into Ryōō High School, she became friends with Minami Iwasaki, Hiyori Tamura and Yutaka Kobayakawa.

In To Be Decided, Patricia decides to have the girls do a cheer leading session set to the show's theme song, which hassles the girls between preparations for their class' cultural displays and preparations for the routine. At first, Patricia has a hard time trying to convince her friends and even causes an argument with Kagami, but she bribes Konata with a ticket to an Aya Hirano event, where people could shake hands with her. Konata gets her friends to help out, and even though Kagami is initially against it, she becomes the most enthusiastic of the bunch to do the routine. At the end of the episode, Patricia and the rest of the main cast take place in cheer leading session for the school's cultural festival.

In the manga, Patricia is properly introduced as a Ryōō High exchange student in The Typhoon Hits Land (chapter 193, volume 7), but has appeared in three chapters prior: the extra chapter of Volume 2 (in which she is unnamed), Moe Drill (chapter 87, volume 3) and Japan In My Heart (chapter 183, volume 6).

Patricia, Hiyori, and Konata getting dirty looks from the others

Patricia and the others in yukatas 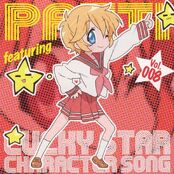