The Yonder Here is the twenty-second episode of the Lucky Star anime.

During the episode, Nanako has a joyous conversation with Konata about her favorite baseball team. Konata then surprises Kagami and Miyuki by approaching them for help on a question, only for Kagami to not be impressed when she finds out that the questions were from a game that Konata has been playing. On another day at school, Kagami has lunch with Misao and Ayano for once, but fails to trade jokes with them. Tsukasa then has trouble sleeping that night.

On another day, Konata helps Yutaka close a jar of marmalade properly. She then struggles to open a bag of chips without scissors. Afterwards, when Konata and Yutaka play a video game, the former starts talking to her father about some uncomfortable topics, including about what her mother was like. Later that night, Konata's late mother, Kanata, appears as a spirit. As she looks over her family in the room, both Konata and Sōjirō discuss what her life was like, while she was still alive. Although Sōjirō rushed Kanata into love and marriage, Sōjirō was confident that he loved Kanata the most and that she loved him back. A long flashback scene then takes place, where Kanata thinks back on all the happy times she shared with Sōjirō, and concludes that she did love him deeply as well (although she is disturbed about him exposing Konata to eroge). As Konata and Sōjirō prepare to take a picture, Kanata joins in with them, but appears as a shadow in the actual picture. Konata and Sōjirō review the picture and are highly shocked and disturbed at the shadow, and fear that they are cursed.

The camera rolls in front of an empty, still destroyed studio. The producer is rambling on about how he fired all three members of the Lucky Channel staff, and how he originally did not want the job, but took it anyway, as a source of power and popularity. In the meantime, the director is trying to tell the producer that the camera is rolling as he is saying this, and at the end of the producer's rant, he finally figures out what the director was trying to tell him. 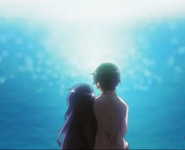 Kanata and Sojiro sitting beside each other looking into the sea

Kanata and Sōjirō after a day at the beach

Kanata sleeps on Sōjirō on the way home from the beach